This 160-foot long through-pin-connected Pratt truss was constructed in 1891 by Chicago's Lassig Bridge and Iron Works.  However it was not built in North Bend - it was the seventh crossing of the Yellowstone River on the mainline of the Northern Pacific Railway in Montana.  1891's heaviest imaginable locomotive was just a few hundred thousand pounds.  Just over thirty years later, the largest mainline locomotives were nearly 1.2 million pounds.   So when a new, stronger bridge was erected over the Yellowstone in 1923 to support these new super-sized locomotives, the old bridge was dismantled, moved to North Bend, and re-erected over the south 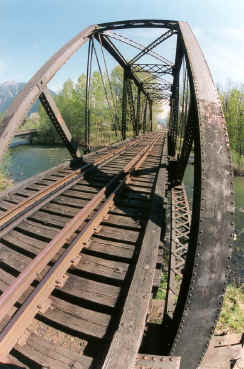 Bridge technology developed rapidly in the late nineteenth century - it had to.  Expansion of the railway across the country needed a safe and reliable way of crossing rivers and gullies.  Early bridges had trouble supporting the weights of locomotives and were not very good at resisting the stress of dynamic loading (loading caused by things in motion).  By the time railroads were stretching to the west, bridges were constructed of wood and iron.  But it was the development of the Bessemer process and steel that revolutionized bridge design and construction.  Development of different types of spans the could take advantage of steel's strength allowed rapid growth of railways and the size of locomotives.

The though-pin-connected Pratt truss was the most common design in the period from 1885 - 1920.  It defines bridge construction in an era that saw rapid growth in the size of locomotives, the length of trains and the miles of railways.  It allowed a bridge to be largely constructed in a yard in sections and erected on site similar to a child's construction toy.  This made construction more efficient and allowed a design to be used in many places with just minor changes.

Snoqualmie Depot Hours: 10am - 5pm, 7 days a week. No admission charge to visit the depot and grounds.

Price: No admission charge to visit the Snoqualmie Depot and grounds. Admission $10 per adult (age 13+), $5 per child (2-12) to visit Railway History Center Campus.

Riding the Train: The train runs Saturdays and Sundays, April through the end of October.