The railroad changed everything

The railroad changed everything. Prior to the completion of transcontinental railroads (1869 and later), settlers spent four to eight months coming west along the Oregon Trail. Once railroads were a viable option for even the countries’ poorest, immigration and migration into the West was intense and immediate. Within a generation the Pacific Northwest was peopled by thriving communities of settlers. 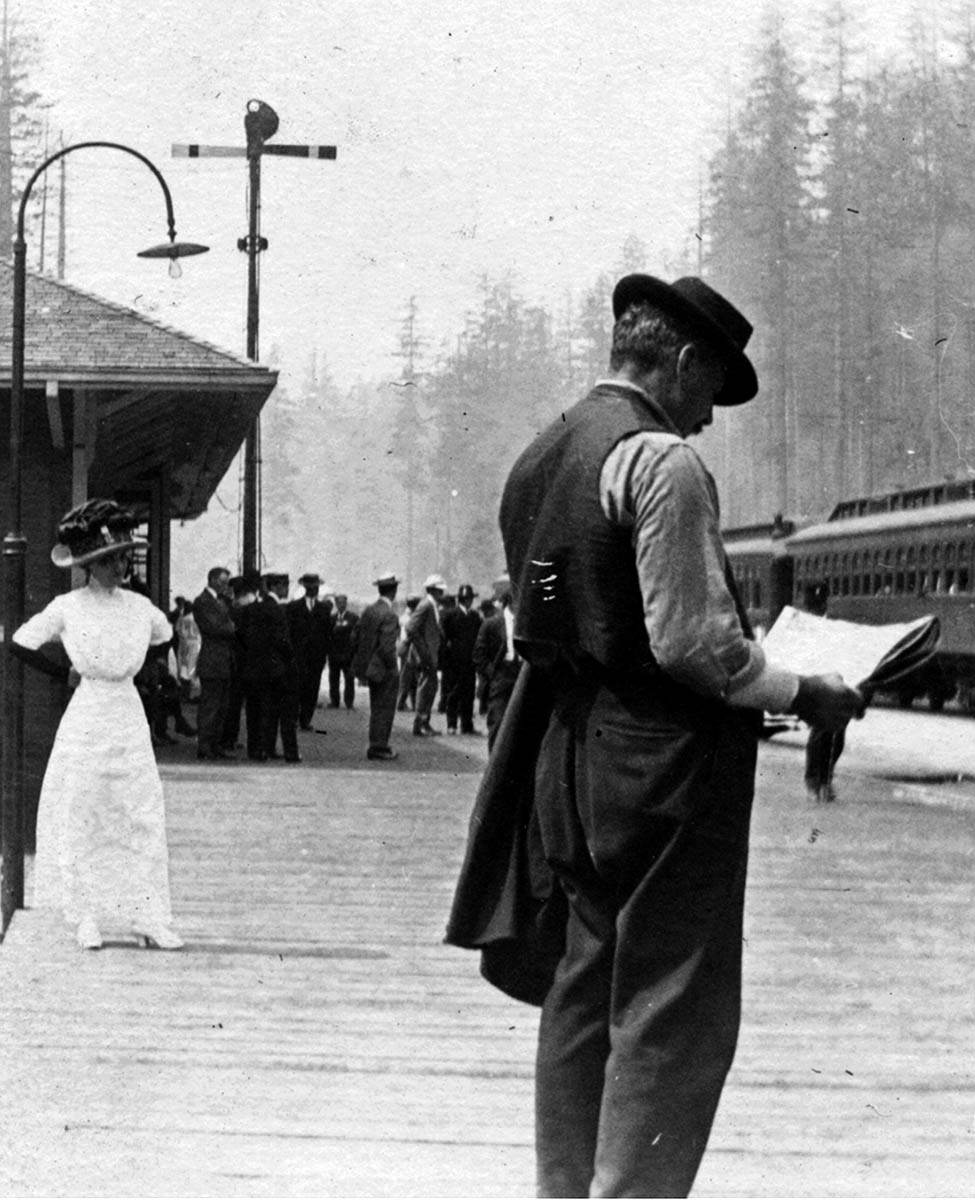 “Time and space are annihilated by steam.” Asa Whitney

Whitney, an American merchant who travelled abroad in the mid-1800s, experienced first-hand the ease of commerce that railway systems provided. The journey west ~ 2,400 miles and 4-8 months ~ was reduced to a mere week or two following the completion of the first transcontinental railroad. The nation was connected on a level it had never been before and the impact was felt immediately. 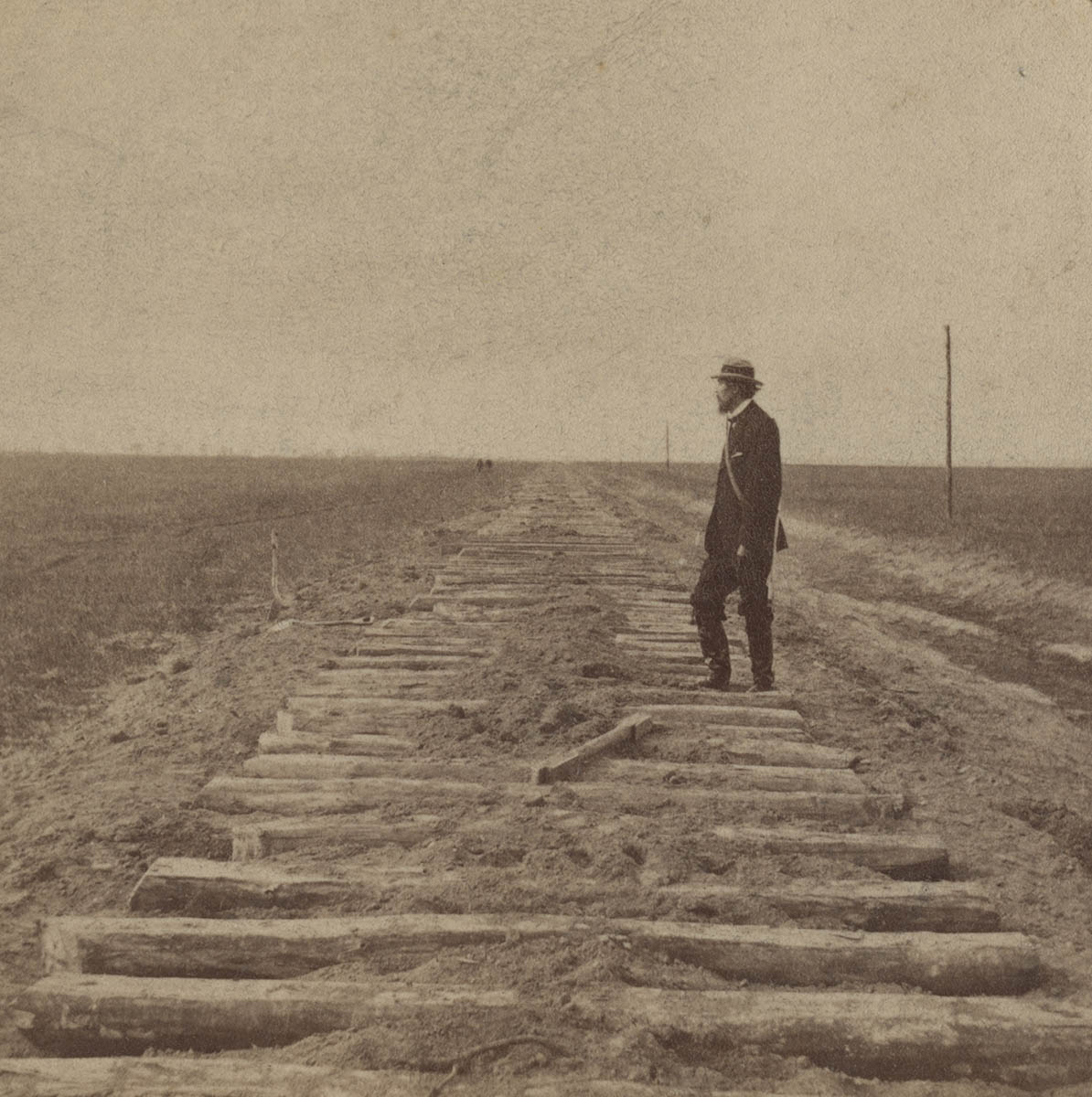 1866 excursion to the 100th meridian. “The end of the track.” Union Pacific Railroad Museum
In 1869, the Union Pacific Railroad (UP) and the Central Pacific Railroad (CP) met at Promontory, Utah. The Nation’s first transcontinental railroad was complete. The UP had built east to west, relying heavily on Irish immigrant labor. The CP had built west from Sacramento, CA, through the Sierra Nevada mountain range. The CP had relied heavily on Chinese immigrant labor. Both the UP and CP experienced challenges, including maintaining both supply levels (building materials) and adequate staffing. The endeavor was supported and partially subsidized (land grants + money) by the government, which saw the advantage of swift transcontinental commerce. 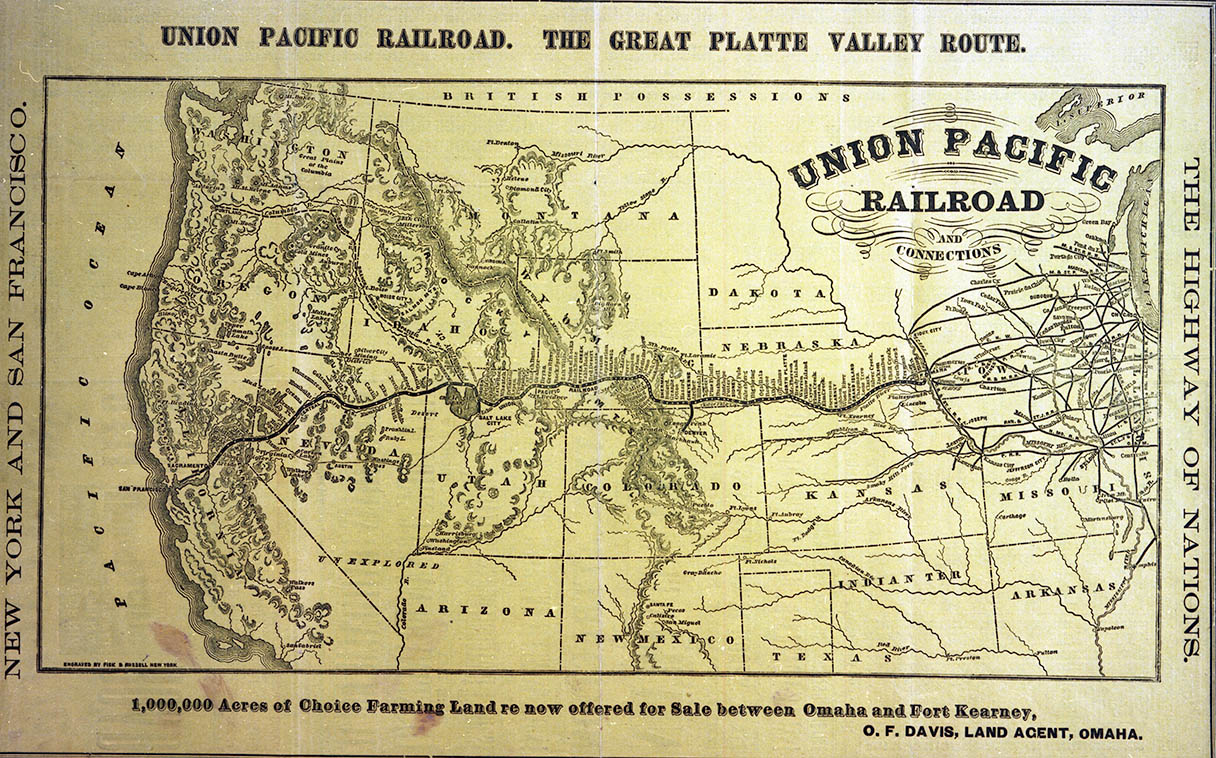 “Whoever seized the existing and future routes of trade here would have control of an area embracing eight huge and barely populated states which held incalculable resources.”
Josephson, The Robber Barons

Much like the Central and Union Pacifics, the NP was granted large amounts of land by the U.S. Government in return for completing the first northern transcontinental. The NP received around 44,000,000 acres of land ~ most of it granted in a “checkerboard” pattern (see map below). Railways that received land grants sold land to bankroll the railroad. Most railroads had a real estate division as well as a construction division ~ one of which would handle land sales. Selling the land along its route was an important part of construction and sustainability because building railroads was expensive! 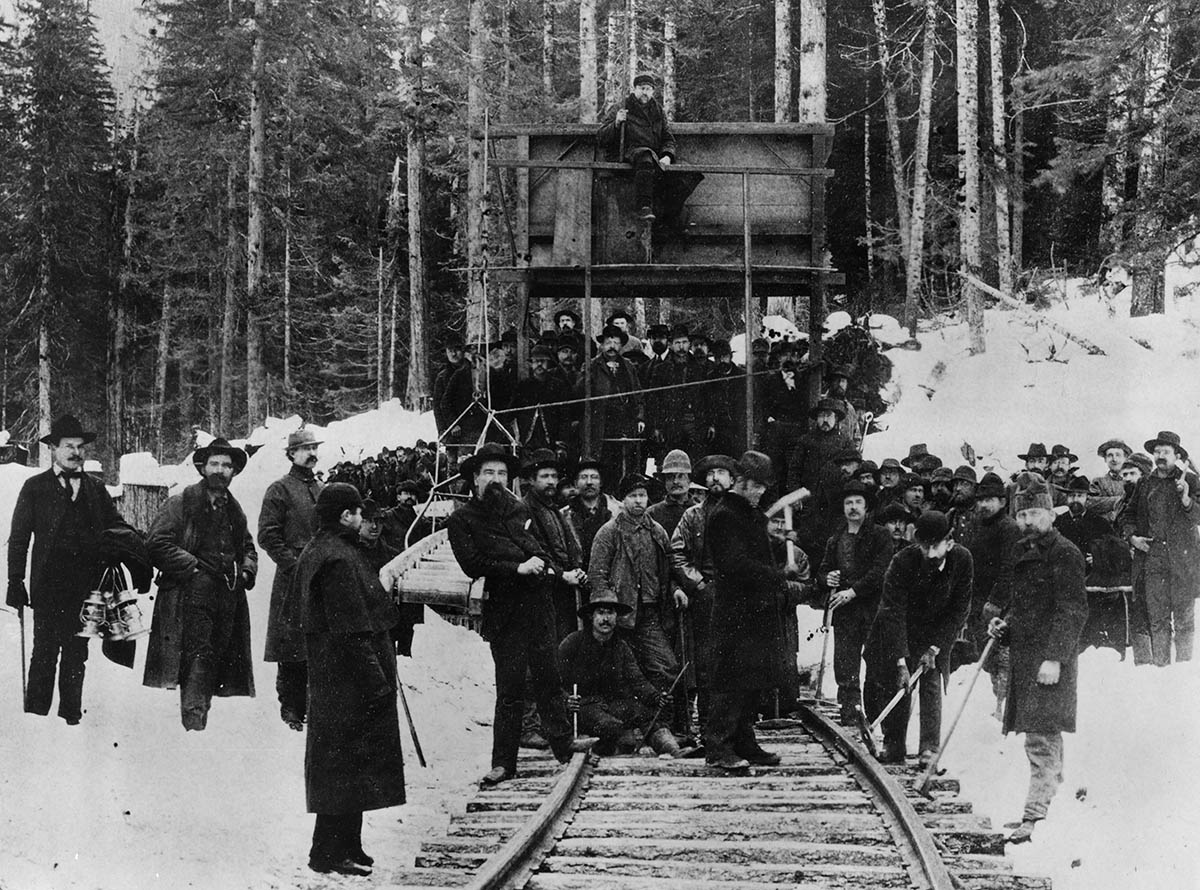 The Great Northern Railway was different ~ James J. Hill received no government assistance in completing his northern transcontinental. Hill had a different construction philosphy: the GN was built in pieces so the railroad would be self-sustaining, even during construction. Image: final spike on the GN. Northwest Railway Collection 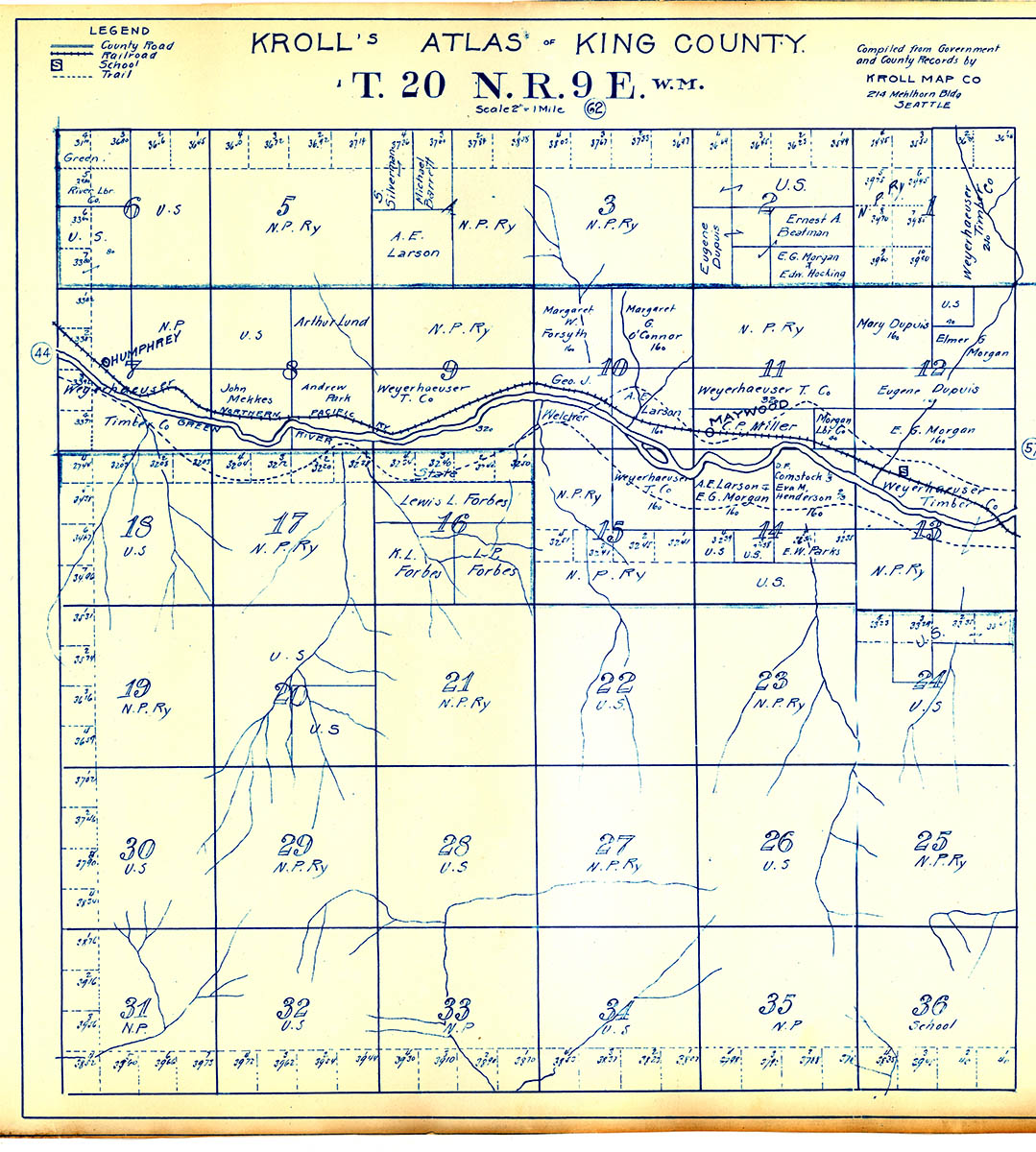 Early settlers in the Northwest found a land thick with trees and damp most of the year. It was a place where Northwest Coast Native Americans had evolved and were thriving. Settlers had to cut away old growth forest to build their log cabins and rough hewn wood buildings. They had to cut down ancient trees to clear land for their farms and orchards. Native Americans had distinct advantages over the European settlers because they had adapted to the environment, had developed trade networks, and were able to thrive within their means. Soon, the railroad would shift the balance. 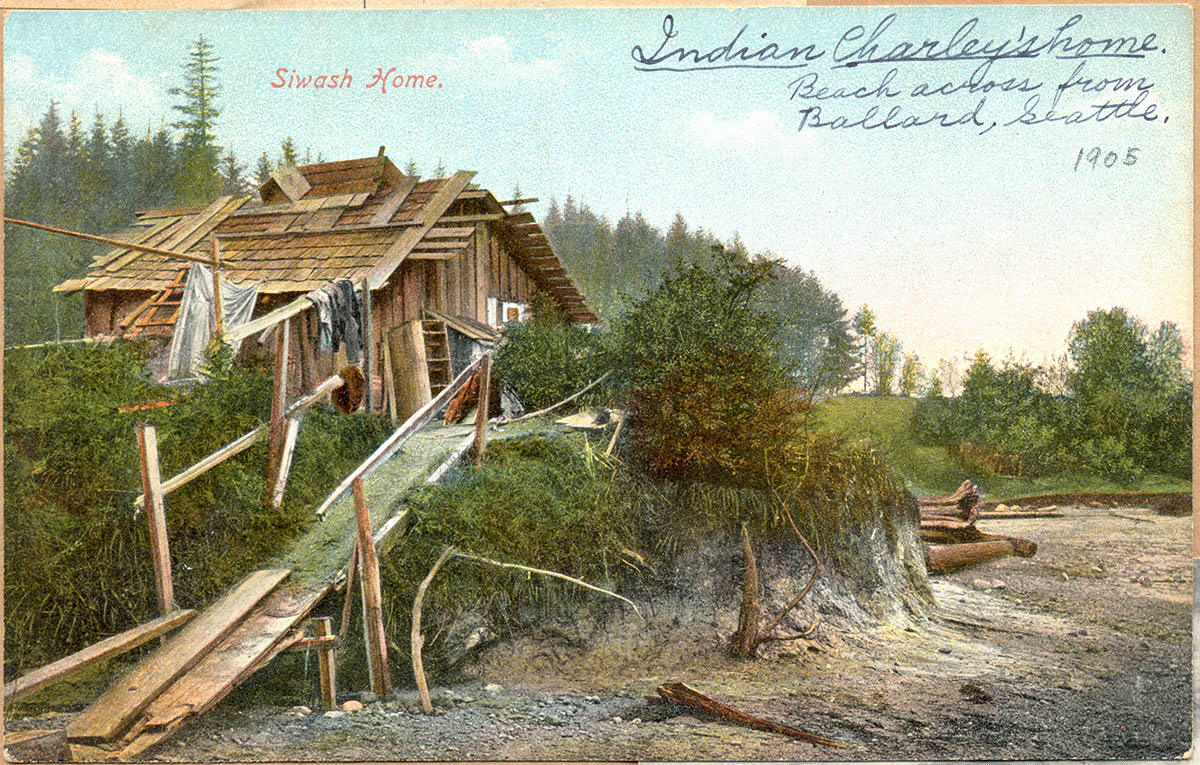 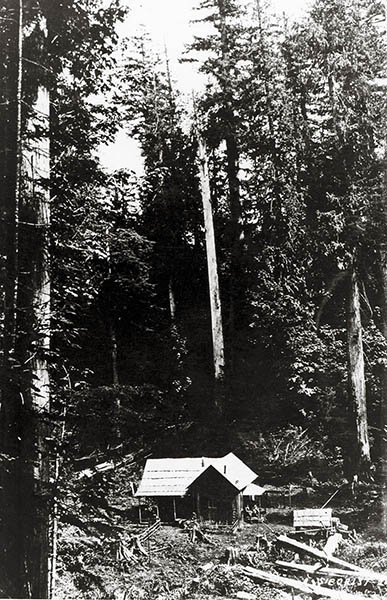 Arrival of railroads in the Northwest

Instead of a remote outpost that took months of travel to get to, the railroad made the region accessible. The northwest saw an influx of settlement in both cities and rural areas. The location of railroads and the frequency of train service influenced the spread of the new population.

Seattle waterfront circa 1880. Yestler’s wharf is in foreground. Note the large sailing ship and the already denuded hills. By 1880, Seattle had a population of over 3,500 (King County’s population was nearly 7,000). University of Washington Libraries Special Collections: Hester 10059 (left) and Hester 10058 (right).

Railroads facilitated western settlement. Land to sell and the desire to generate more traffic ~ freight and passenger ~ were compelling reasons for railroads to actively promote settlement. It was big business for the railroads, and marketing efforts stretched across the Atlantic Ocean to Europe. It was by design that much of the settlement lands were land grants the United States gave the railroad companies as incentives to build the railroads. The United States wanted the west settled as quickly as possible to establish a valid claim to the territory. 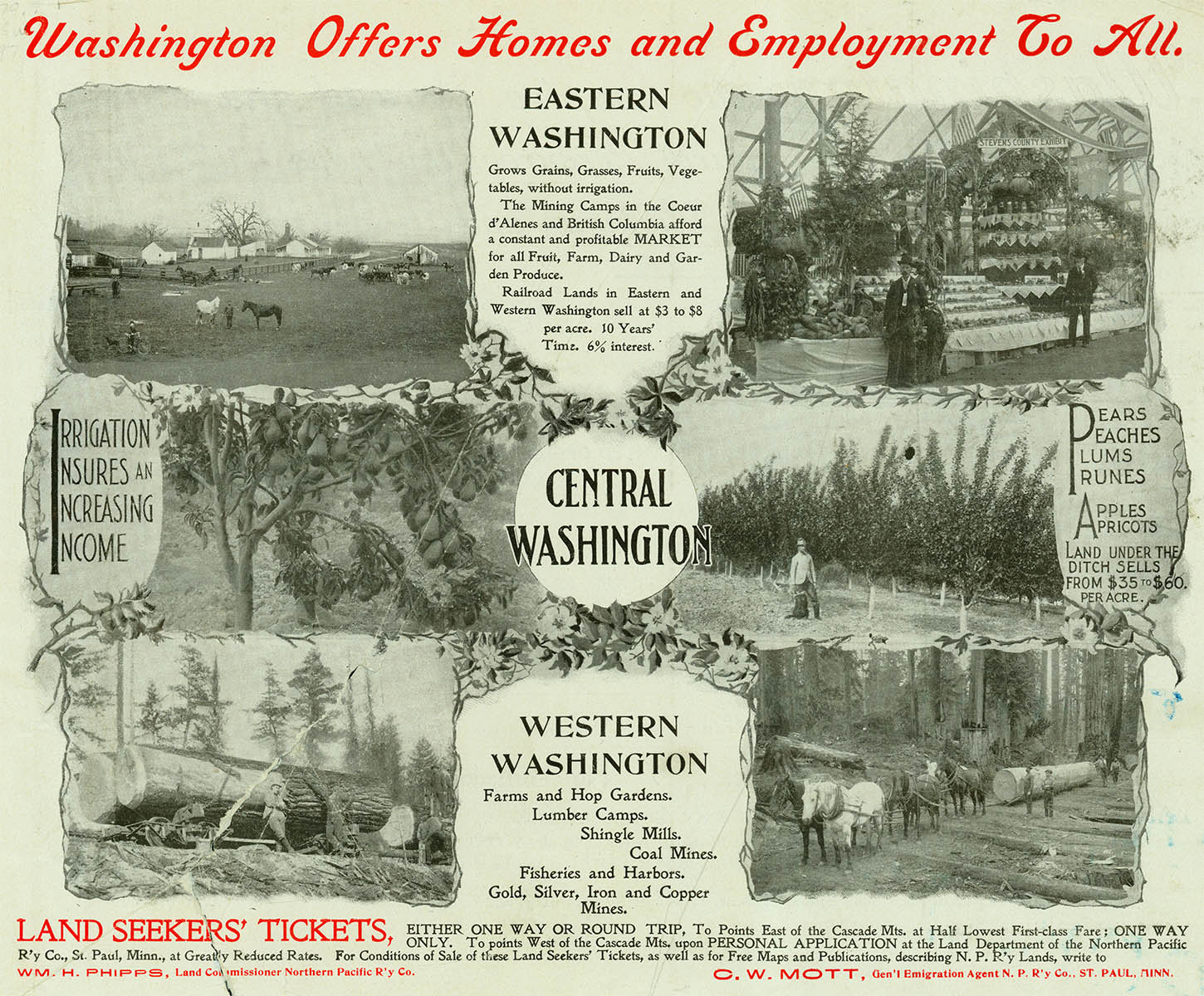 Railroads exponentially expanded logging and mining. The capacity of a train to haul raw logs from a hillside to a mill far exceeded what had been possible with a horse or oxen. Similar economies were realized in coal mines, and throughout the mining industry. The rail network allowed product to be shipped to markets outside the Northwest. 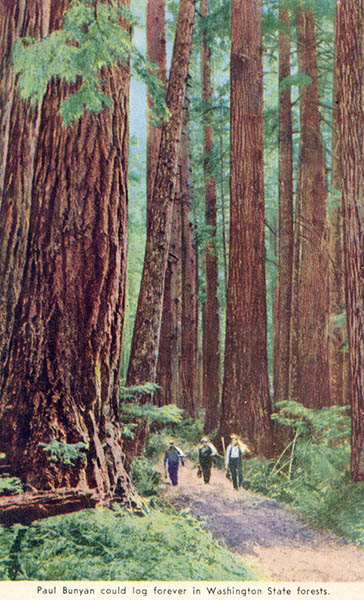 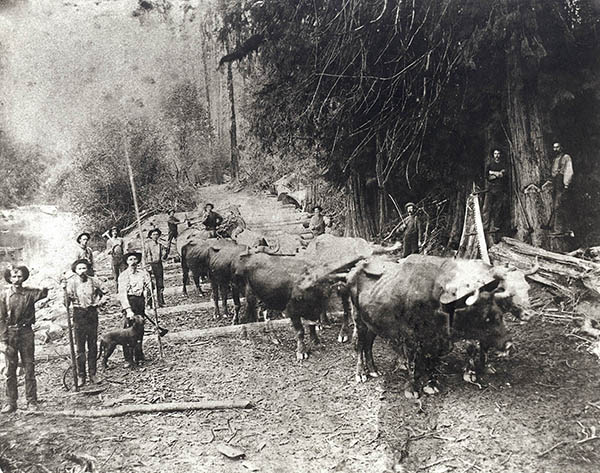 Prior to the arrival of railroads, logging was restricted to areas near a body of water. Animals were used to drag the cut trees to the river or lake. Oxen were the most popular but did not have nearly the pulling power of a locomotive. Logging with oxen, Snoqualmie Mill Company slough 1891. Snoqualmie Valley Museum PO-40-264 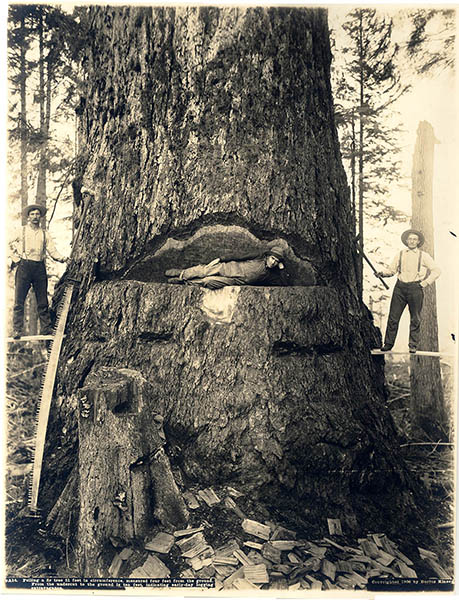 The railroad allowed people the mobility to settle the vast western region of the country, but it also enabled the emerging middle class to travel for pleasure. Now, tourism wasn’t just for the rich and powerful, the less affluent could spend weekends traveling to various local sites, including Snoqualmie Falls. 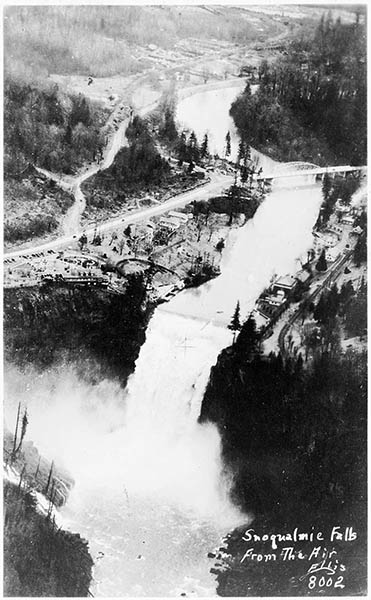 Aerial view of Snoqualmie Falls circa 1935. The railroad is on the far right side of the image. Northwest Railway Museum Collection.

July 4, 1889, the first train excursion to Snoqualmie Falls brought members of the ME Church Society and their friends. Roundtrip fare was $2 from either Seattle or Snohomish. The train left Snohomish at 8 am and Seattle at 8:45 am. Passengers spent the day at the Falls and the return train departed at 6 pm. Lots of local people turned out for a large celebration and food was shared by all. 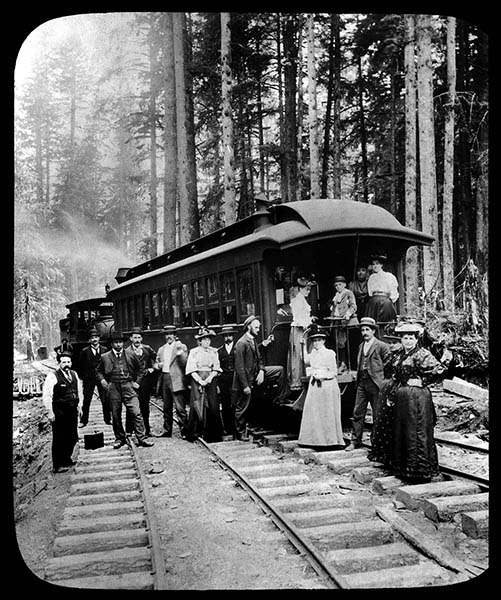 This is the companion webpage for the Phase 1 exhibit in the Train Shed Exhibit Building. The exhibit is designed to complement Docent tours and is on display in the Train Shed. It can be viewed during regular train excursions on weekends April thru October.

The exhibit was made possible by a grant from:

George H. Douglas, All Aboard! The Railroad in American Life, 1996

Click on the links below to view additional exhibits.

The Railroad Built the Pacific Northwest

Mask Wearing at the Museum

On April 18th, theTransportation Security Adminsitration ("TSA") regulations requiring all railways, airlines and buses to have persons masked through May 3, 2022 were overturned by a Florida federal judge. The CDC continues to recommend that people wear masks in indoor public transportation settings at this time.  For more information about our social distancing restrictions please visit our Social Distancing Updates page. 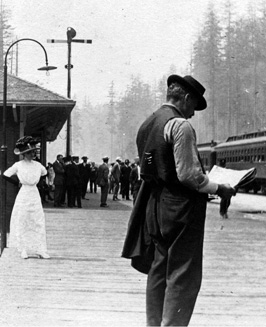 The Railroad Built The Pacific Northwest

The Railroad Changed Everything